Polish authorities announced that the fallen rocket belonged to Ukraine 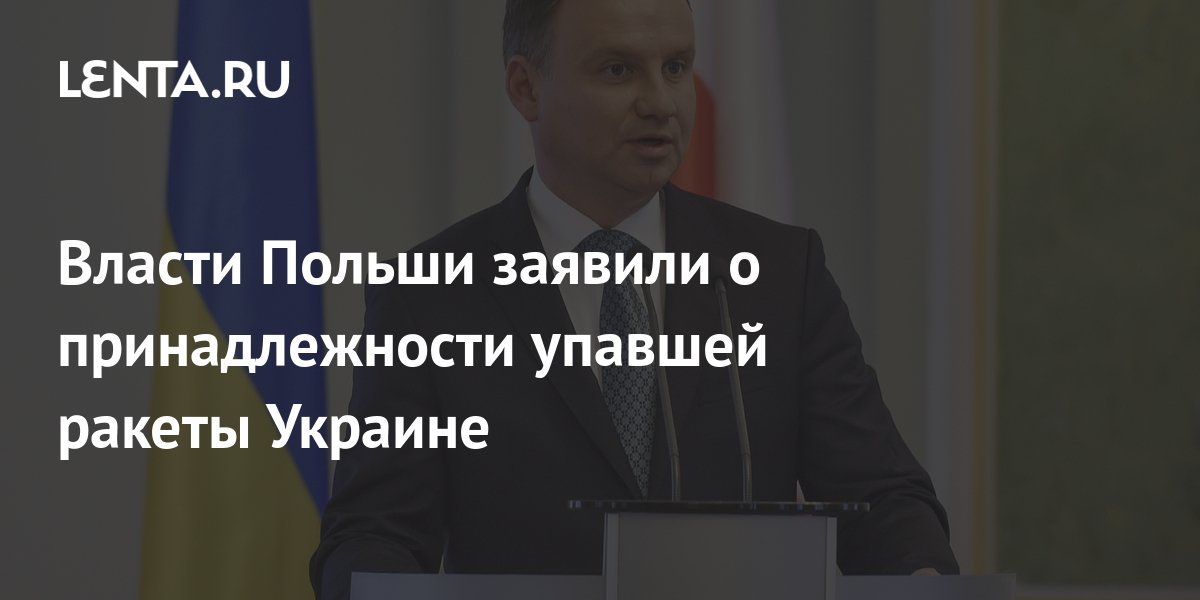 President of Poland: The rockets that fell with a high probability belonged to the air defense of Ukraine

Polish President Andrzej Duda admitted that the missile that landed on the country’s territory was probably from Ukraine’s air defense system. Reuters.

According to him, most likely it was an “old” S-300 missile produced in the 70s. The politician pointed to the lack of evidence of a deliberate attack on Poland. He said that even Warsaw has no proof that the missile was fired by the Russian military.

Ukrainian air defense fired missiles in different directions. There is a high probability that one of these missiles will land on Polish territory. A preliminary examination of the scene revealed that there was no classic rocket explosion, but rather the result of a simple rocket fall.

NATO Secretary General Jens Stoltenberg confirmed that, according to preliminary information, the missile was indeed from a Ukrainian air defense system. The North Atlantic Alliance has no evidence that the incident was linked to Russia. The incident is under investigation, but preliminary results match Warsaw’s version.

Most likely, this is a Ukrainian air defense missile, but the main message is that Russia is ultimately responsible, because if it had not started a brutal and aggressive war against Ukraine, this would not have happened.

Ukraine admitted to allies that it used an air defense system near the missile crash site. CNN cited Kyiv officials as pointing out that the Armed Forces of Ukraine (UAF) attempted to shoot down a rocket near the village of Pshevoduv at the same time as the incident. The data that this particular air defense missile fell on Polish territory has not been confirmed.

At the same time, Ukrainian leader Volodymyr Zelenskyi called the fall of a missile in Poland a “significant escalation” and blamed Moscow for everything. According to him, the longer Russia experiences impunity, the more dangerous it will be for the West.

Today, something happened that we have been warning about for a long time. Terrorism is not confined to the borders of our state. Russian missiles hit Poland

The US also blamed Russia for the downed missile. Adrienne Watson, spokeswoman for the White House National Security Council, explained that regardless of the results of the investigation, Moscow will ultimately be to blame. According to Washington, Kiev had and still has the right to self-defense. At the same time, Watson added that the US has full confidence in Poland’s investigation and will not make an assessment until it is completed.

US President Joe Biden told the United States’ partners in the G7 and NATO that the explosions in Poland were the result of Ukraine’s air defenses.

Dmitry Peskov, the presidential spokesman, said that the Kremlin does not see any culpability on Russia’s part in connection with the rocket landing on Polish territory. He asked to “call things by their right names”.

Russia has nothing to do with what happened in Poland. And here things must be called by their proper names

Dmitry PeskovPress Secretary of the President of the Russian Federation

The Ministry of Defense of the Russian Federation believes that the statements of Ukrainian sources and foreign officials about the culpability of Russia are deliberately provocative. Experts from the Russian Military-Industrial Complex (OPK) identified the remains in photographs taken in Poland as components of the Ukrainian S-300 air defense system. It also became known that Russian attacks on Ukraine that day were carried out some distance from the Polish border.

According to preliminary information, two rockets fell on a grain dryer in the Polish village of Przewodo, Lublin Voivodeship. Polish radio ZET, citing sources, reported that two people died as a result.

Courts dismiss two out of three complaints against car cartels