An elderly woman is dead and a suspect is in custody after what police describe as an “unprovoked attack” on a sidewalk in downtown Toronto on Friday morning.

The woman, believed to be in her 70s and 80s, was walking along a sidewalk at the northeast corner of Yonge and King streets at 11:40 a.m. when a suspect pushed her to the ground and fled, according to the police.

The woman suffered serious facial and head injuries and was eventually pronounced dead.

Police said a suspect, believed to be in his 30s, was arrested near Richmond Street about an hour later.

He is expected to be charged with aggravated assault, although the charges could be increased pending the completion of an autopsy.

At this point, homicide detectives were made aware of the incident but did not resume the investigation, according to police.

“The information we have indicates that she was pushed to the ground and suffered serious injuries to her face and head. But we cannot confirm the cause of death at this time,” the insp said. Craig Young told reporters at the scene.

“It’s pending the results of the autopsy. There may be other aggravating factors that occurred during the interaction that may have contributed to the cause of death and may not be directly attributable to the suspect.

Police are investigating the death of a woman following an assault on Yonge and King streets in downtown Toronto on Friday, January 20, 2023.

Young said witness information as well as video footage reviewed by investigators suggests the woman was “just walking along the sidewalk” when she was attacked.

He said officers carried out a “thorough and exhaustive search” of the area after the attack and were ultimately able to locate a suspect.

Young said investigators are still looking to determine if there was “a potential interaction that may have occurred” prior to the assault and will run a web for additional video footage.

He said they will also look into whether the suspect could be the same person who was wanted in connection with property damage along University Avenue and Church Street earlier Friday.

The suspect in these cases, he said, would have “caused a disturbance” and “minor damage” to buildings in the area.

“The description of the suspect is close enough that we obviously look at these investigations and see if they are related,” he said. 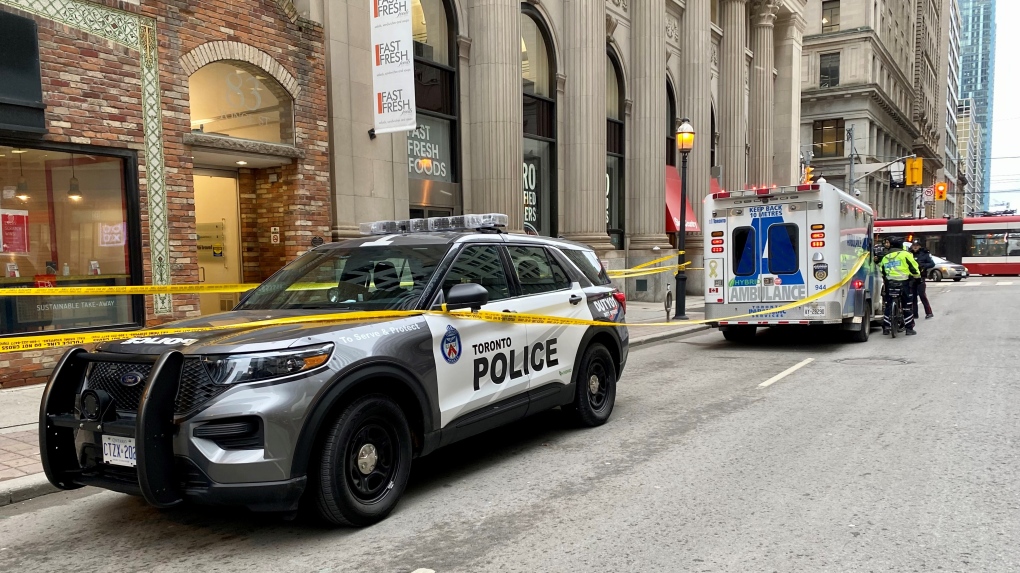 Police are investigating the death of a woman following an assault on Yonge and King streets in downtown Toronto on Friday, January 20, 2023.

LATEST IN A SERIES OF SEEMINGLY RANDOM VIOLENT INCIDENTS

Last month, a man stabbed two women on a tube train at High Park station, killing one of them.

At the time, police said none of the victims knew their attacker.

A few weeks later, a 59-year-old homeless man was killed in an alleged “swarm” attack near University Avenue and Front Street.

Eight girls, aged 13 to 16, were each charged with second-degree murder in her death.

“All I would say to the public, unfortunately, is to pay attention to your surroundings and understand that these attacks are happening and be very, very careful.”

Mayor John Tory released a statement about the incident, which he said “has become far too common.”

“This is a tragedy and my condolences go out to the woman’s family and loved ones,” Tory said.

“Although the facts of this specific case have not been determined and made public, we all know that we must do everything possible to determine the root causes of such acts.”

the Blues in the World Cup final by beating Sweden